The Mayborn Science Theater is located on the campus of Central Texas College in Killeen. The facility opened in August 2003. Since then, thousands of visitors have enjoyed programs including planetarium star shows and laser light shows.

Visit the Mayborn Science Theater on the campus of Central Texas College in Killeen Texas and immerse yourself in a state-of-the-art experience like no other.

Embark on an imaginary journey through time and space. Our new million dollar, full-scale digital upgrade has created a full-dome display and allows for more entertainment opportunities. The upgrade, performed by Global Immersion of the United Kingdom, includes a five-channel Fidelity Bright full-dome solution employing a wide range of exciting technologies to allow the facility to support its extensive and diverse show programming in the 60-foot dome.

Experience a unique and artistic mix of light, color and sound. Laser light shows combine eye-popping 3D graphics, pure laser-generated colors and 15,000-watts of digitally reproduced sound to bring your favorite music to life. Treat yourself to the most impressive motion picture available presented on a dome-shaped screen, more than twice as large as traditional movie screens.

What is a planetarium?

A planetarium is a type of theater that re-creates the night sky as seen from earth. The singular difference between planetariums and conventional theatres is the architecture. In planetariums, the audience sits beneath a hemispherical dome. Onto the dome, in almost complete darkness, the night sky can be projected to a level of detail that no modern city-dweller will ever see because of light pollution. The sky can be portrayed from any point on earth, any day and any point in time. 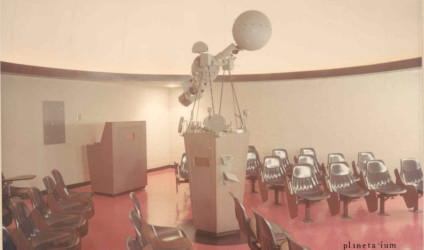 What makes the Mayborn Science Theater unique is the fusion of the most cutting edge technologies and equipment allowing us to offer programs far beyond the mere re-creation of the night sky. Installed in 2009, our full-dome system utilizes the entire 30 meter dome to project enormous images in high definition. When viewing a full-dome production, the audience must move their heads significantly to take in the entire image. It’s almost like you’re viewing an image as large as the sky itself - an effect caused by this “Immersion Technology.” In addition to playback of produced content, our full-dome system can project a digital universe utilizing our Uniview software suite. This digital universe is the most accurate and comprehensive astronomical database on the planet. The software is visualized into a three-dimensional universe with actual images from NASA, JPL and other sources incorporated into the database. With this system we can fly an audience around the Milky Way galaxy and the known universe. It’s not just the night sky any more! In addition to the full-dome/Uniview systems our Omniscan laser system can produce entertaining shows coupled with the latest hit music. Last, but certainly not least, our Minolta Infinium II star projector is one of the best conventional planetarium projectors available; projecting 16,000 stars onto the dome. These systems may be operated independently or concurrently. For example, while our laser system is generating images during a show; either the full-dome system or planetarium projector can provide an interesting space or night sky background. Come and see one of our out-of-this-world shows!

A brief history of planetariums

The world may never know who made the first planetarium or device that accurately represented the heavens for an audience.

Found off the Greek island of Antikythera in 1900, a device was discovered that shook the foundations of what researchers thought was known more than 2,000 years ago. Partially reconstructed, the device consists of a series of gears and wheels that rotate on each other to predict the positions of the moon and planets. This bewilders researchers who are still attempting to unravel the dense mathematical analysis necessary to construct the device. It indicates a much higher state of technology across a multitude of disciplines including astronomy, physics, mathematics, engineering, metallurgy and precision construction. It remains a mystery and a heated topic of discussion for researchers.

The pyramids and other wonders such as Machu Picchu, confirm a number of civilizations have grasped much of the knowledge requisite for constructing a planetarium. The first device we may recognize as a planetarium, where an audience would be enclosed in a space for viewing an artificial sky, was a sort of tent with holes in the top. It was constructed by Arab craftsmen in the 12th or 13th century; brought back to Europe as spoils from the Crusades. The tent sat on a sort of turntable perimeter that could be rotated around the audience to represent the motions of the heavens. A parade of buildings, spheres and devices followed for 800 years; all of them leaving much to be desired.

Two unrelated technologies would be required to usher in the modern planetarium. These were the economical construction of thin shell concrete hemispherical domes and the electric light bulb. Both of these were developed in the early 20th century, and the birth of the modern planetarium followed soon thereafter. In the year 1900, a German scholar, Oscar von Miller, began planning a museum to celebrate the accomplishments of science and technology. He sent a request to the Carl Zeiss optical company for ideas to include in the planetarium. Rather than using holes for the stars, the engineers decided to use the new electric light bulb. At first, the bulbs were to be placed on the dome, but that was an engineering nightmare if they had to move. Finally the idea to leave the dome stationary and use it as a projection screen evolved. It took more than 10 years to work out all the details on the projector. World War I, and the economic depression after it, slowed down everything in Europe. Finally, the first planetarium with a Zeiss projector opened in 1924 in Munich, Germany. The first planetarium in North America opened in 1930 in Chicago. The early Zeiss projectors were true engineering works of art, and the firm monopolized the market for years. However, the exorbitant prices and long order-build times made installations, especially in North America, a rarity.

In the 1950s, an American newspaper man, Armand Spitz, developed a much smaller, less costly planetarium projector. The Spitz projectors made the small planetarium possible, and scores of them are still in use around the world. You can see our original Spitz projector in the display room adjacent to the theater.

Today there are thousands of planetariums around the globe and dozens of firms competing for their equipment needs. The digital age has brought in almost limitless possibilities for projectors, content and use. At the Mayborn Science Theater, we have brought together some of the best technology available in the hopes of exceeding your expectations.